Why Britain Won the War 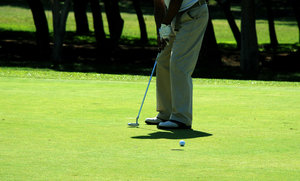 1. Players are asked to collect bomb and shrapnel splinters to save these causing damage to the mowing machines.

2. In competitions, during gunfire or while bombs are falling, players may take shelter without penalty for ceasing play.

3. The position of known delayed action bombs are marked by red flags at a reasonable, but not guaranteed, safe distance therefrom.

4. Shrapnel and/or bomb splinters on the fairways or in bunkers, within a club's length of a ball, may be moved without penalty, and no penalty shall be incurred if a ball is thereby caused to move accidentally.

5. A ball moved by enemy action may be replaced or, if lost or destroyed, a ball may be dropped not nearer the hole without penalty.

6. A ball lying in a crater may be lifted and dropped not nearer the hole, preserving the line to the hole, without penalty.

7. A player whose stroke is affected by the simultaneous explosion of a bomb may play another ball. Penalty one stroke.

MoneyHub has updated its comprehensive directory of student jobs. With 50+ well-known employers listed and links to… https://t.co/kHvrx4edxo