Some people still don't use email. That's a mistake.

In "the good old days" if you wanted to communicate with someone you walked till you were close enough for them to hear your grunts and you grunted and waved your hands around to get your message to them.

Then a woman invented talking, then someone invented writing, now you could leave a message for someone to get later. Scratch your message on the wall of the cave, while you went out to get water, and whoever got home first knew you wanted them to light the fire or there would be no dinner.

When the early forms of paper were invented it meant you could write a message down and give it to someone to take to the person you were trying to communicate with. The Pony Express was an evolution of that where many messages from many people in one place could be delivered by a man and a horse to many people in another place. If he didn't get shot. The modern mail system evolved from the Pony Express, bicycles took over from horses.

At one stage we had carrier pigeons and pigeon post. There is a famous story often quoted in "Business Intelligence" literature that credits the Rothchild family increasing their already substantial fortune by learning the result of the battle of Waterloo, 48 hours before the rest of London. This allowed them to buy stocks at deflated prices knowing Wellington had already won which they knew would push share prices up. But according to the Rothchild archives there isn't actually proof of this particular message, they might just have had better riders and faster horses. 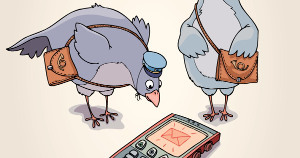 One thing is certain though, efficient communication is important.

If your communication system is better in terms of speed and accuracy of conveying information you are at an advantage and if it's cheaper as well, that's even better.

For many years the postal service in it's various guises was the most popular and reliable way of communicating information. Now it's not. Recently New Zealand Post reduced the number of deliveries they make a week and again put up the price of posting a letter. Why? Because fewer people are using "snail mail" because more people are using electronic messaging in it's many formats and in particular email. Because it's better, it's faster and it's cheaper.

Bay Financial Partners Limited loves email. Email gives us a record of what we've said, who we've said it too and what the persons reply is, already attached to the original message. Done right you can check the authenticity of the sender and receiver, check that they've got it, opened it, deleted it or forwarded it.

We can send words and pictures, spreadsheets and files, videos and yes, viruses and spam. Not yet smells or tastes though - snail mail still wins there. I don't think we want smelly spam emails.

Many people don't seem to realise that an electronic copy of a document is now a valid legal document in nearly all cases. The banks started scanning paper cheques and destroying the original paper many, many years ago. Electronic copies of documents are acceptable to the IRD.

You can bemoan the fact that mail takes longer to get through, that hardly anyone sends Christmas cards any more, your supply of hay is going stale and your coup is hardly ever used or you can get with the times and start using email.

Email - get used to it. It's here to stay, at least until something better comes along.

And it's probably already here, there are many other ways to electronically communicate. Facebook, Instagram, SMS, to name a few. I can sometimes be heard complaining that my kids haven't replied to my email. I have to send them a text to remind them to check their email!